Pafos (Paphos) is located on the west coast of Cyprus and is the mythological birthplace of Aphrodite, the ancient Greek goddess of beauty and love. Because of this people say Paphos is surrounded by an air of romance and that it seduces its visitors. Paphos enjoys majestic landscape, historical sites, beautiful coastline, medieval monasteries, byzantine churches and delightful villages where tradition is still a way of life.

Paphos is classed as a city, but almost always referred to, as I shall do in general here, as “Paphos Town”. Paphos Town is made up of two quite different areas: the touristic Kato (lower) Paphos and the older, more characterful Ktima (upper) Paphos. The market in Ktima is open Monday to Saturday but particularly interesting on a Wednesday when the villagers sell their fruit and vegetables.

Kato Paphos is popular for its nightlife close to the sea.

Paphos is also the name for the region, the large curve of western Cyprus, and stretches from the Rock of Aphrodite area below Paphos airport, up to Pyrgos at the border.

All of our villas are in the Paphos region, and driving times from Paphos airport are from 20 minutes (2 bedroom Villa Katerina) to about 75 minutes 4 bedroom Villa Amorosa and 2 bedroom Villa Aphrodite, and they are well worth the drive. 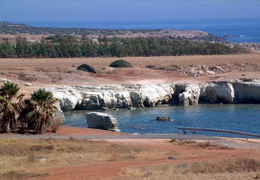 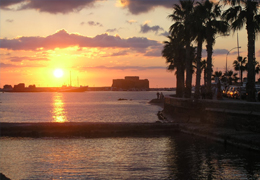 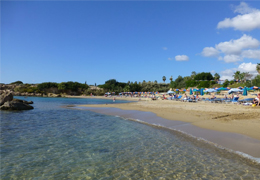 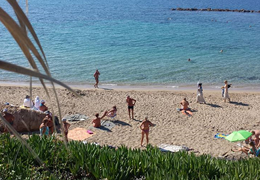 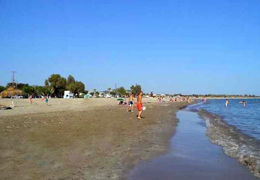 Beaches in the Paphos area

Between Limassol and Paphos. The Rock of Aphrodite is a magnificent natural pebble beach. The Petra (rock) tou Romiou is a cluster of small and big rocks in the sea, adjacent to the beach. According to legend, Aphrodite, the Goddess of love and beauty rose from the waves here. Beautiful at sunset.

Between Paphos Airport and Paphos Town, in the Τimi-Mandria area, the beach is long and wide and partly developed.

The beach near the Paphos International Airport is long, sandy and unspoilt. Turtle nests have been observed in this area.

The beaches west of the airport from Geroskipou towards Paphos town are within the tourist developed area (Blue Flag).

Geroskipou beach is very long and sandy, and feels more secluded as you go away from Paphos. I have been lucky enough to swim with a turtle here. Sea trac chair in high season.

One of the 6 Paphos beaches awarded the Blue Flag. Sea trac chair in high season.

After this beach there are small beaches in the direction of the harbour ending with the wooden deck and sand beach of the Municipal Baths (Blue Flag).

The beaches between Paphos and Cape Drepanon are all within the tourist developed coastline (Blue Flag). These include Faros (Lighthouse) Beach, a sandy beach with an excellent view situated at the west end of Paphos.

Coral Bay is a protected shallow sandy beach, usually with calm sea, with decking and lots of facilities (Blue Flag).

The beaches from Cape Drepanon to Lara Bay are long sandy beaches. Lara Bay is one of the few remaining havens for loggerhead and green turtles to nest.

Between Lara and Baths of Aphrodite, there are small secluded rocky and sandy beaches 50m – 100m long, usually with rocks in front. The most famous here is the Fontana Amorosa sandy beach, also known as the Blue Lagoon, white sand and turquoise clear sea.

During the Hellenistic and Roman times Paphos was the capital of Cyprus. Paphos has so many ancient sites, and is of such outstanding historical value that UNESCO added it to their World Cultural Heritage list. I will not try to give you too much information here as I am sure you will take guide books, and don’t forget the Cyprus Tourist Office will provide free maps and leaflets on many subjects.

One of my favourite historic places in Paphos that I urge you to visit (and there is wheelchair access) is the exquisite floor mosaics by Paphos harbour – which date from between the 2nd and 5th century AD and depict scenes from Greek mythology. And from here take a walk past the bobbing fishing boats and yachts around the harbour to the medieval castle. There is easy parking near the Mosaics and lots of shops and restaurants.

We at Sundance Villas are so proud that Paphos has the enormous honour of being awarded the European Capital of Culture 2017!

This is an enormous honour as well as being a great responsibility for Paphos and for Cyprus. As the city chosen to be a “European Capital of Culture”, Paphos must contribute to this evolving event by exhibiting its own unique characteristics.

The end result should highlight all aspects of European culture, both shared and unique, whilst promoting stronger bonds between European citizens.

We at Sundance Villas are all particularly looking forward to the concept of the “Open-Air Factory”. This concept proposes the integration and transformation of the entire district into a big stage: Existing cultural sites will be restored, and events will also take place in a variety of random and unexpected places of Paphos daily life (what a great idea!). Music, dance and theatre are high on the agenda. With imagination and a lot of hard work, Paphos will evolve into a living museum of local visual arts for you to experience.

Look out for it!

I will send you more information about Paphos before you go. 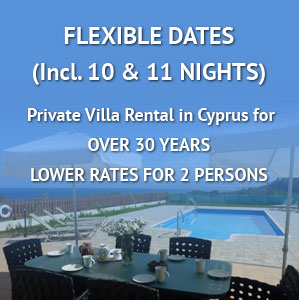 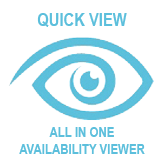