Cyprus is a beautiful island to visit for so many reasons, one of those reasons being the incredible range of birds that they get there.

So many of our clients ask us about the different types of birds and which of our villas are the best to stay in, to possibly see some of them.

So here I have compiled a list of our rural villas that are the best for twitching – The Cottage, Villa Aurora, Villa Ampelitis, Villa Quardia, Villa Filip and Villa Iris.

Villa Amorosa and Villa Aphrodite would be good for seabirds as they are 50m away from the beach.

A couple of years ago Mum and I were driving down past the Vineyard Villas, through the beautiful village of Akoursos, on a road that leads down to Coral Bay. We were flagged down by a bird spotter, who was parked up at the side of the road with his binoculars in his hand. He told us that if we were lucky and looked, that we would be able to see the Bee Eaters! We didn’t want to say to him that we had already had a couple of them in the garden of our private villa, but we stopped and watched them flying in groups, chirruping noisily overhead, looking for a telegraph wire to land on! It was a truly wonderful experience!

Here is a printable list of all of the Cyprus Birds that you may see on your holiday!
How many did you spot? Let us know 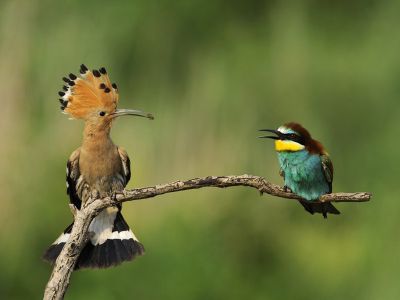 Our enormous thanks to Marc Suller for this interesting report. Photos have randomly selected. Summary
Spent a week in Nikokleia in a villa booked through Sundance Villas. As I was with Marlen, it was a non-birding trip, but I popped out for some birding most mornings and evenings. The villa was only 2 km from the aspro pools, but we found good birds at most places we visited (e.g. archaeological zones, Arkamis, Troodos, Akrotiri peninsular). By the end, I had seen over 100 species with 14 lifers.

Day 1
We arrived in Cyprus mid-afternoon and picked up the Suzuki 4×4 before driving on to our Villa in Nikokleia. We were a little early so drove to the Asprokremnos reservoir to pass the time. First birds were House Sparrow, Squacco Heron, Hooded Crow, Spanish Sparrow, Wood Pigeon, Swallow and then a Cyprus Pied Wheatear. The latter turned out to be very common, found at most sites visited. Spent the rest of the day settling into the villa although sitting in the pool area added Greenfinch, Collared Dove, Jackdaw, and Magpie. A brief evening visit to the aspro pools (2km away) resulted in Crested Lark, Zitting Cisticola and Linnet, all common birds in Cyprus. Day 2
Got up at first light to explore aspro pools. Seemed a bit disappointing at first but soon found a single Ortolan Bunting. Also found Goldfinch, Moorhen, Common Cyprus Warbler, Chukar, Turtle Dove, Little Egret, Common Sandpiper, Common Kestrel and Great tit. A flock of 8 squawking purple herons circled high above the dam area the entire time I was present.  Although the pools themselves had silt on them due to excessive rainfall, every visit to aspro pools produced some bird of interest.

After breakfast, we explored the Paphos archaeological area where a Woodchat Shrike gave good views, we spotted a  common swift. After lunch at the harbour, and a stroll around Pafos town, we returned to the villa, where I watched a Sparrowhawk fly along the valley.

Day 3
Got up early again to try the farmland around the village of Mandria. Straight away I found a singing male Black Headed Bunting, followed by a Black Francolin. I then almost trod on a Common Quail,  a bird that I have only ever heard. Driving along the coast, I noticed a flock of birds in a overgrown field that turned out to be Short Toed Larks. Today, we planned to drive past Pafos up the coast. First stop was Tomb of the Kings site that was interesting but of more interest to me were the Isabelline Wheatear and Whinchat. We then had lunch at the small village of Agios Georgos, where I watched large numbers of Red Rumped Swallows coming in off the sea. Yellow-legged gulls were also present.
After lunch, we drove along rough tracks to the spectacular Avgas Gorge. The walk up to the gorge through a wooded area gave great views of an Olivaceous Warbler, plus Chiffchaff, Sardinian Warbler, and a Blackcap. For the only time on the trip, I hard a brief glimpse of a Cetti’s Warbler. They are very common in Cyprus, heard in virtually all habitats.

Driving further along Lara beach (famous for nesting turtles) I found a small flock of Sanderlings.

Day 4
Drove along the coast to the East this morning stopping at Kourion archaeological site where an Eleanora’s Falcon flew over, following the cliff line. It then started to rain so I had the idea of going to the Akrotiri peninsular for lunch in one of the fish restaurants on Lady’s mile beach (and where we could birdwatch from the car). From the road, there is a gap in the reeds through which you can view Zakaki pool. Lots of Ruff and  Wood Sandpipers were feeding on exposed mud, along with a Black Headed Yellow Wagtail.  A little further on the road runs alongside the Marsh allowing superb views of 100s of Little Stint, two little terns roosting on a sandbank, Sand Martin, and Little, Ringed and Kentish Plovers. Day 5
The weather was better today, so I decided to drive up to Aphrodite’s pool and do the walk along the Akamas coastal path. On route, we briefly stopped at Evretou Reservoir, where Corn Buntings were present, and a party of German birders pointed out 6 White Winged Black Terns.

The walk along the coast was great, and I also found a Black Eared Wheatear, Common Buzzard and Peregrine Falcon. We took lunch at a restaurant with beautiful sea views and watched a Pallid Swift close enough to allow identification of the main features.
After lunch, we took a slight detour along Smiyies track; The route passes farmland with scattered trees and 2 Rollers, a Yellowhammer and another flock of Bee-eaters were spotted. The road back to the villa passes a known site for Long Legged Buzzards, and I was in luck, a pair were present and circling above the gorge.

In the evening, I drove down to an olive grove for Stone Curlew. The trees run in parallel lines so peering between them, and I found two birds. Day 6
Marlen wanted a relaxing day, so she spent it around the pool. However, I popped down the aspro pools for a while in the afternoon where I found a Red Backed Shrike, a pair of Northern Wheatears and several alpine Swifts over the dam area. Best still, a female Pallid Harrier was being harassed by a kestrel, and a roller flew by.

In the evening we drove to Mandria for supper, and a brief detour to the shore gave views of a Blue Headed Yellow Wagtail and a hoopoe. Day 7
Drove up to Troodos mountains today along the Dhiarizoz Valley, stopping twice en route. Both occasions proved successful; the first with a singing male Cretzschmar’s Bunting and the second a Masked Shrike along with a Serin.  Approaching Troodos, we took the old road winding up through mountain forest where we paused to view a pair of Blackbird and a Wren.

Had some late breakfast, with House Martin and Chaffinch flying about, before walking one of the nature trails. We anticipated doing 2 or 3 km but ended up walking completely around Mount Olympus for 14 km. The views were stunning and the birding great (mainly on the South, Sun facing slopes). The endemic races of Coal tit and Jay were regularly spotted, with many Masked Shrikes.  Had some raptor luck with a Goshawk, then a pair of Bonnelli’s Eagles. Further round the mountain found my only (Dorothy’s) Short Toed Treecreeper.  Passing the North face which still had patches of melting snow, saw a single Spotted Flycatcher.
Finally arrived exhausted back at Troodos, 5 hours later. Stopped at a sleepy village on the way again, where an old couple squeezed some fresh oranges for us.

Last day of the holiday with our return flight at 5.50 pm. Marlen agreed on a trip back to Akrotiri peninsular for lunch on lady’s mile, allowing me to check out some of the birding sites. First stop was Phassouri, which was quiet due to a photographer driving his jeep right up to the pools. As he left, a couple of youths on a motorbike turned up. So, gave up and continued around the peninsula. I did, however, pick up Mallard. Scanning the Saltpans ,I found a Redshank and several Black Winged Stilts. Finally, I arrived at Zakari where I spotted a late White Stork slowly drifting past high above.

After a long lunch and a pint of iced coffee, dropped the jeep off, and made our way back to the UK, where it was only a little above zero.